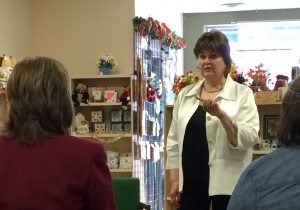 It’s a question that comes up nearly every time I talk with a group of women about having a more powerful personal Presence.

A young woman asked about it at my Highland event the other day.  “How do I avoid being a bitch,” she asked. “It’s a fine line.”

It always tickles me that the people most worried about this issue are the ones who are farthest from the line.  And this woman was no exception. She was so sweet and so soft and so timorous; she could move a long way in the direction of a more powerful Presence and still be nowhere close to bitch territory.

That’s typical – I hear this concern most often from people who have the least to be concerned about.

And that makes me feel bitchy! The fear of being labeled a bitch keeps so many women from stepping into their power, from playing full out, from accomplishing all they could if they weren’t so damn worried about stepping on someone’s toes.

Dictionaries define “bitch” with words like malicious, spiteful, overbearing, and selfish. Well, no wonder we don’t want to be described like that. Who would?

But maybe “malicious” means I speak up for myself. And “spiteful” means I’m direct; I get to the heart of things.  “Overbearing” could suggest I’m not a doormat.  And am I really “selfish” … or am I just putting on my own oxygen mask first?

If we live in fear of the label, we sacrifice a lot. Who knows what that young woman from my book signing could accomplish if she weren’t going through life terrified that people will think she’s a bitch?

The answer may just be to embrace your inner bitch.

Not that we need to go out of our way to actually BE malicious, spiteful, overbearing and selfish.  But we ought not to shy away from saying and doing things that might make somebody somewhere uncomfortable.  And I’m afraid that’s exactly what happens when “what if they call me a bitch” is running our lives.

I remember not liking it much. I also remember deciding to leave the sign on the door. Let it be a warning to anyone walking through that door instead of an insult to me.

I wouldn’t have said it this way at the time, but I was indeed embracing my inner bitch. And refusing to be intimidated by the name.

You won’t be surprised to hear that that wasn’t the last time somebody called me a bitch. I was in talk radio for years … the hate mail can be vicious!  And, I’m a woman with opinions. And I’m not shy about sharing them.

I wouldn’t want to be any other way. I encourage you to have opinions too. And share them.

It would be lovely if we’d reached a point, all these years later, that women could speak their minds and be assertive and be in charge without running the risk of being called a bitch. But we haven’t.

The truth is, “Bitch” is still used all day long to keep women in line.  Or try to anyway.

I say let’s step out of line.

Watch for that moment when you find yourself holding back. When it’s on the tip of your tongue to say something, but you swallow your words because you don’t want to be a bitch.  And let me know what happens when you decide to let go of that fear.