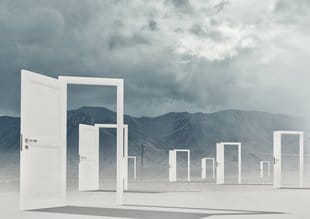 Sometimes you know it’s time for the next right thing. Other times, somebody lets you know. Either way, most of us have had or will have the experience of moving on to a new position or even a new career.

My friend Lisa Kaplin wrote about women at home raising kids and the hurdle they face, positioning themselves for other work. I don’t doubt that it’s a challenge. And I know for sure they’re not alone.

Plenty of men and women have seen a job evaporate; they’re forced to find something new. And it’s easy to get stuck “in transition”—they can’t quite launch their next act. Or even figure out what their next act should be.

I know just how they feel.

When I got blown out at WLS after 18 years, I knew for sure I had to find another radio job. I didn’t know how to do anything else; I’d been in broadcasting since college. (As I often said, “I have no marketable skills.”) It took nearly a year of unemployed-and-broke before I wound up as John Landecker’s side-chick at WJMK.

A couple years later, when that gig caved in, I took a different tack with some help from a coach. I stopped dismissing my skills as not marketable. And started thinking about them in a new light.

You know that I work with clients now who need to talk about their work and its value in a more compelling way. Some of them are selling a service or product. And some are selling themselves—because they’re searching for a job.

For those in transition, we use a process I call chunking up and chunking down. You might want to try it; here’s how it works, using my path as an example.

If I labeled my work “doing the news” or “reporting the traffic” or even “hosting a talk show”…there really was no market for those skills, at least not as done by me.

That’s where I had to chunk down, or get more specific.

What I really did was gather information. And distill it. And write it up in a pithy, powerful way. And deliver it with some style. I asked probing questions to develop information beneath the surface. I worked on a team with a bunch of boys. And kept my sense of humor in the process—so I worked well as part of an ensemble.

Now those are skills that could be used in so many non-radio contexts, right? Looking at my work that way opened a world of possibilities.

I also chunked up, getting more general.

Instead of calling myself a talk show host or a newscaster or a morning show side-chick, I decided what I really was…was a performer. True, until then, most of my performing had been on the radio. But why limit myself? It was clear that I could do what I did in some other context.

In front of an actual, live, in-the-room-with-me audience, for example. Which, of course is exactly what I do now. I never would have expected to wind up as a professional speaker and workshop facilitator. But it’s a very natural outgrowth of my first career in broadcasting.

If you’re wondering what might be next for you, you might sit down and give these things some thought.

Chunking up and chunking down will help you set a new course, whether you’re emerging from years of devotion to child-rearing or from a company that went kaput. Or even if you’re just feeling ready for a fresh start.

There are some key questions to ask yourself, too; we’ll save those for another time.