Rebounding from a misstep must be a universal experience, judging from all the response to my article about getting back on the horse.

In blog comments, emails, and social media posts, women thanked me for being open about an uncomfortable experience. Shared their own stories about recovering from a blunder. And told me they appreciated the inspiration.

The first few men I heard from gave me … advice to make me a better speaker. It’s classic, isn’t it?

Women feel with you. Men fix you—or try to, anyway.

Putting a positive spin on it, I thanked these guys for wanting to help. Bless their hearts … it was kind of sweet, don’t you think? I’m lucky that people I’ve connected with along the way care enough to comment.

And. There was an element of mansplaining to the whole thing. Maybe you’ve been a mansplainer? If you’re a woman who works with men, you’ve certainly been on the receiving end.

What IS mansplaining, anyway?

Merriam-Webster: “to explain something to a woman in a condescending way that assumes she has no knowledge about the topic.”

Women have been objecting to it at least since Rebecca Solnit wrote Men Explain Things to Me a decade ago. Her story about a Very Important Man lecturing her on a new book she should read is hilarious. He was talking about a book Rebecca Solnit wrote.

Mr. Know-it-all was so caught up in his own brilliance, he had to be told three times that he was explaining a book he hadn’t even read to the author of that book. Even then, he barely paused his patronizing prattle.

That’s really at the crux of what came to be known as mansplaining. When a man gives me information about a subject he deeply understands and I don’t know much about, that’s helpful. Often interesting. Sometimes fun.

It’s when they tell us the ins-and-outs of something we already know quite well that women bristle, in the face of what Solnit calls a “combination of overconfidence and cluelessness.”

Beyond bristling, how to respond?

You saw that I go for the “bless his heart, he’s trying to help” approach. When I was younger and less confident, I was more likely to get huffy. “Why is he talking to me as if I’m a dim bulb?”

At this point, I’m usually pretty sure when a man’s going on as if I don’t have a clue, it doesn’t have much to do with me. Maybe he’s lacking confidence himself and over-compensating. Or maybe it’s a chivalry thing—riding to the rescue he thinks I need. I rarely see myself as a damsel in distress, but whatever. It’s his stuff.

A Fast Company article recommends the direct approach, citing a woman who will tell a man straight out, “It feels like you don’t take me seriously as an equal. Is there any truth to this statement?”

Probably works if you’re talking to a colleague who’s likely to become a repeat mansplainer—at some point, it’s best to put a stop to it.

Humor can be an antidote to condescension. I’ve used an exaggerated, “Really? I’ve never thought of that,” said with a smile instead of an edge. It’ll give most people pause … sometimes you can see the light dawn for them. And, others will barrel right on, yammering as if you know nothing and they’re the font of wisdom.

If you go for the light approach, the “no edge” part is important. The tone should be gently ironic, not sarcastic and nasty.

You try a reframe. One of Fast Company’s experts says she’ll sometimes shift her view of a colleague doing some mansplaining and use it to her advantage. She says the guy is likely overexcited about something you’re working on. And she recommends using his enthusiasm, especially if you’re in the midst of pitching an idea or a product.

For men who are perplexed.

This is probably the time to say some of my best friends are men. Seriously, I’m not a man-hater. (Ignore the fact that some one-time radio colleagues called me an “emasculating viper.” I laughed out loud when one of them reminded me of that on Facebook.)

Yes, you run into an ass now and then. But most-of-the-men-most-of-us-work-with are good guys who want to help. Sometimes they’ll actually ask how to stop, or even how to know if they’re mansplaining.

Maybe you saw the tweet-storm that erupted when author and digital design expert Kim Goodwin offered a handy flow chart to help them. Some men seemed to think Goodwin was being condescending with her graphic depiction of men being condescending. 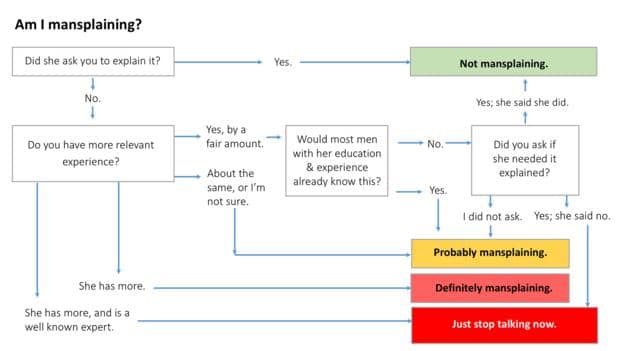 Maybe you’re a recovering mansplainer? Or, you’ve been on the receiving end of a well-meaning effort to tell you in detail about your own area of expertise?