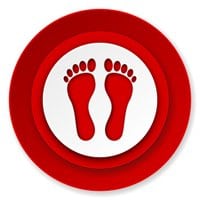 So there we were Sunday morning, sitting in a circle of folding chairs. Each of us with a chance to express our experience and our point of view.

As the first young woman began to speak, she pulled her feet up in front of her and rolled them over from the front … so that the TOPS of her toes were on the floor and her heels were elevated. Like a ballet dancer gone mad. Her voice, up in her head, was tiny and tinny.

Another woman didn’t go quite that far. She took her feet off the floor and rested her heels against the legs of her chair … so her feet were in the classic tiptoe position. Her toes and the balls of her feet were still on the floor, but barely, as she grappled to get her thoughts out.

And then there was the woman who prepared to say something – and wrapped one leg around the other. Then picked up her other foot too. So now there’s nothing grounding her. She struggles to express herself, you can see the energy up around her head and shoulders, and her words don’t quite make sense.

When somebody doesn’t say straight out what’s on their mind, we say they’re “tiptoeing around the subject.”

It’s a figure of speech. But it turns out it’s also quite literal. And I was watching it in action at this meeting.

Somehow the men managed to keep their feet on the floor as they spoke. They were serious about what they were saying; they sounded like it and they looked like it.

The women, with their tiptoeing and curling and rolling feet … sounded scattered, tentative, wishy-washy. We could hear that. And we could see it.

What does all this mean for you?

Your words have more weight when your body is grounded. Whether you’re standing or seated, when you want to sound strong, like you know what you’re talking about, you want your feet flat on the floor. Even pressing down into the floor just a little bit.

This is what it means to be grounded. You might imagine yourself drawing energy up from the earth. That energy animates you as a speaker – and I don’t just mean a “speaker” in front of an audience giving a talk.

I mean a person with a point of view, with knowledge, with feelings you want to share. In a conversation or a meeting or a presentation. And certainly in a professional situation where you need to be perceived as an expert in your business.

And listen, we recognize the sound of “grounded” even when we can’t see you. So when you’re talking on the phone, even though nobody’s watching, ground yourself. Plant your feet, press down a bit, turn on your leg muscles. Straighten your spine and sense the energy in your lower body, especially in that energy center right below your navel. Now allow that energy to flow through your entire body. You’ll be able to use that sense of contained energy to connect with your listener.

Pay attention to the connection between your body and your voice. Notice how using both more effectively gives you more impact.

And pay attention the people around you too. When they’re pussyfooting around or when they lose their moorings. Or when they stand their ground. (Aren’t the metaphors fascinating?)

I’d love to hear what you experience – share your observations in the comments.