Listen to the audio version of this post here. 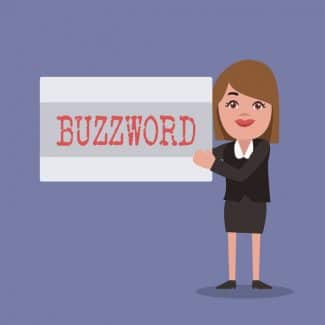 It’s a hard habit to break, speaking in “the special words or expressions used by your particular profession or group.”

It’s a good habit to break, if you want to make a real impact on anyone outside your particular profession or group.

So why do people default to jargon in the first place?

It’s partly our programming. We just get used to talking to the same people about the same things and using the same words to do it. Our common vocabulary communicates efficiently with others in our field, whether we’re lawyers or marketing professionals or chemists.

There can be an emotional component to jargon too. Sometimes the specialized language of our field helps us really feel connected with others in the same business. We become an in-group when we’re all talking about our work the same way.

And, of course, jargon can also delineate who’s in and who’s out of that group. “We don’t speak the same language” is one way to say we’re not playing on the same team here.

Using jargon often becomes a way to convey status and sometimes it’s an effort to elevate our status. That doesn’t always work out though.

While it may seem that our business buzzwords make us sound smart, experienced, or inside, they’re more likely to convey insecurity.

In a pitch competition among MBA students, they found the more anxious participants were about their relative status, the more jargon they used.

Ditto for dissertation writers. Those from lower-status universities peppered their papers with more jargon than those from the prestigious schools.

Even in live conversations, the researchers say, people who worry about how they compare to others use more jargon than their more secure counterparts.

In fact, the researchers capture their findings in the title of their paper. “Compensatory Conspicuous Communication: Low status increases jargon use.”

And in case you’re wondering, yes, using a lot of acronyms also counts as “compensatory conspicuous communication.” It’s all driven, they say, by a concern about being evaluated and an effort to be seen as smart or in-the-know.

That’s one good reason to use less jargon. And here’s another one.

Jargon makes your message go in one ear and out the other.

In my experience, defaulting to business-ese or the particular language of your occupation is especially problematic when we’re talking. It’s a sure way to make your listeners tune out.

Yes, when you’re used to speaking, writing, and maybe even thinking in the lingo of your business, it can be a challenge to translate your thoughts into words that make an impact on the rest of the world.

It’s worth the effort, though. Chances are good your potential clients, customers or referral sources use language differently than you do.

They may not fully understand what you mean by your patois. And even when they do comprehend the meaning, you miss a chance to make a real, human connection when you rattle off something that sounds programmed or scripted.

This came up in an exchange on LinkedIn the other day. I asked my social networking comrades to describe their work the way they would if they were introducing themselves at a meeting. Some of the comments sounded for all the world like marketing brochures.

Whether we’re speaking live or virtually, nobody wants to hear a marketing brochure. A better approach is to talk like a human being, which means ditching your jargon. And using natural, spoken English.

When we hear somebody talking in written English, it sounds stilted and unnatural. We have a tendency to dismiss it as phony or pretentious and we may tune out entirely.

A person might use that more formal, structured language to sound smart or to elevate themselves in their audiences’ minds. As with jargon, the effort falls flat. It becomes another form of that Compensatory Conspicuous Communication.

I offer another series of C’s as a guide for making an impact with your words. Have the Confidence to be Clear and Concise.

And by all means,  add a Comment here about your clear, concise message.