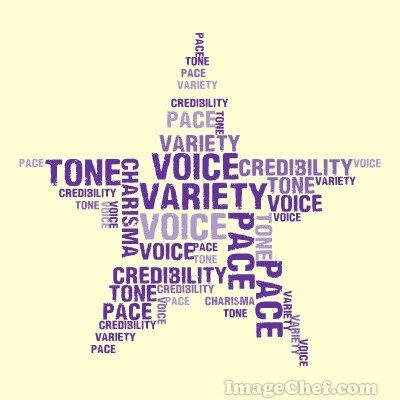 If you’ve been with me here the past couple weeks, you’ve already learned something from the Science of People research on speakers; it’s fascinating stuff and I have more for you today.

The study looked at TED talks, trying to figure out why some go viral and some are much less popular. Even talks about similar subjects don’t have the same amount of success. Why is that?

Science of People focused on talks from the same year (2010), about the same length (15 – 20 minutes). And they asked people to rate the speakers for Credibility, Charisma and Intelligence.

A huge factor in both credibility and charisma was the speaker’s voice.

The evaluators listened for fluctuations in vocal tone, volume and pitch. And the relationship was easy to spot. The more vocal variety a speaker used, the higher they were rated for Credibility and for Charisma.

And, it’s no coincidence that those were the TED talks with the highest numbers of views at ted.com. In fact, the most popular TED speakers had 30.5% higher vocal variety than the less popular ones.

Speakers who seemed to be reading or reciting a script bored their audience online and in the research project. Those who told stories, threw in ad libbed comments, and even yelled at the audience were captivating. They got attention, they held attention … and they got high marks for charisma.

What does that mean for you? You may not be on the TED stage anytime soon. But you are likely to be at a networking event, doing your 30- or 60-second introduction. Or giving a talk for a professional association or Chamber of Commerce. Or doing a new-business presentation or a pitch for funding.

No matter where you’re speaking, here’s the thing to keep in mind. People crave connection. And that comes from conversation not from oration. Don’t give a speech; talk with people.

In everyday conversation, your voice naturally varies … you speak louder, then softer. You speak quickly, then slow down. Your pitch rises and falls.

Based on communication style, of course, some of us have more variety in our voices than others. If you’re one of those highly analytical people who tend toward a monotone, you might want to stretch just for practice so you can have more charisma and credibility with your audience.

Before your next speaking opportunity, practice your material and intentionally vary your voice. Speed up. Slow down. Pause. Whisper. And shout. Let your pitch fluctuate – try everything from a high-pitched cartoon voice to a deep Gary-Owens-style delivery.

The point isn’t to talk like that in front of an audience. But to play around and “limber up” your vocal variety so you have a bit more range when you are speaking for real.

And while you’re at it, try putting the emphasis on different words – and notice how you can sometimes change the meaning in the process.

Have I lost you yet? You’ll lose your audience, too, with that kind of sing-song delivery.

The long and short of it is: you will have more impact and influence if you don’t sound like you’re reciting canned material. Instead, go for the feel of a conversation with your audience.